Growing up, the Steffey family had two garages.
One at ground level held the cars.
The other extended from our basement as a hoarded trove of miscellany that Smaug himself would covet.
Gold? Nary to be found. This treasure was an assortment of weightlifting gear, lake toys, bikes (all stationary, some by design and some by rust), a rarely unfolded ping pong table, musty carpets and other “It’ll come in handy someday” items. Over the decades, these items came and went. Some into rotation in the household proper, and more others lost to yardsales or Goodwill. However, one piece of furniture has stood resolute through the shifting sands of time. Unmoved from the position it’s always held, regardless of the various boxes or scissor stored on top of it.[1]The ‘scissor’ is half of a pair of safety scissors, used to push open the garage door lock. Nestled against a cold, exterior cinderblock wall, sits a glass-topped table, made from composite woodboard and plastered with vinyl branding. A relic of a bygone era.
A cocktail arcade cabinet.

Not just any arcade cabinet. Other households may have held on to their 4 player Pacmans, or barrel-shaped Donkey Kong tables. The Steffeys wouldn’t have such pedestrian games. Space in the garage trove was far too precious to be wasted on the mainstream. We had Qix.

For anyone born more recently than 1975, Qix is an arcade game where you try to draw lines from screen edge to screen edge and claim territory. This goal is made more complicated by a Windows screensaver bouncing wildly around to try and impact your line mid-draw. If you were to ask my mother about the history of video gaming - it began with Pong and ended with Qix. In a world of high-fidelity graphics and cinematic storylines, the studios have lost their way. Nothing beats the adrenaline of drawing boxes.[2]This is hyperbole. Missy Steffey is an ardent fan of NES Legend of Zelda, Wii Sports, Mariokart, and Two Dots

Unfortunately, our cabinet died shortly after the birth of my sister. Although Brianna was eventually forgiven for this suspicious pairing of events, my mom never got over the death of Qix. Over the years she has called on the assistance of multiple repairmen, and all have estimated entirely too many dollars to justify the fix. And so the machine has lay dormant in the basement hoard, covered with a white bedsheet to further emphasize its ghostly presence in our household. Suspended in limbo by a woman who holds onto hope that the damage done by time will magically reverse.

Last year, while building a custom slot machine for a casino party, I was installing a set of arcade buttons when I realized an opportunity to steal the favorite child position once and for all. Between a raspberry pi, some minor woodworking, and a plethora of Google-searched arcade ROMs of questionable legality, I might finally be able to restore the corporeal form of Qix. (Spoiler if you’re too lazy to keep reading, I did [3]More or less )

In the next few posts, I want to delve fully into the process I underwent while designing, building, and customizing this machine. There are hundreds upon hundreds of blogs and videos outlining the technical steps required to build an arcade cabinet via Retropie, but I’m hoping to bring the context of acheiving a slightly more unique design goal.

Whatever I ended up building, it wasn’t going to be a clone of our basement-dwelling ghostly friend. Cocktail cabinets are large, bulky, and ugly. Some have faux wood-paneling on the sides, admittedly making them the classiest spots in an arcade filled with brightly colored vinyl-printed upright cabinets, but that is an exceedingly low bar. Above all else, I wanted the final product to not look like a video game cabinet. There’s nothing wrong with a classic cabinet in a dedicated game room, but for this to see any real use it would need to be at home outside of Flynn’s Arcade.

Along with that rule, I landed on a list of a few more considerations I tried to keep in mind while designing.

The central question that ate up at least 2 months of my passive planning was whether to make a modern-looking piece of furniture that could blend in with the house, or lean heavily into the lake-theme and design a themed centerpiece. I spent many hours brainstorming ways to do the latter. During meetings at work I doodled dock supports wrapped in rope and fishing floats, rope nets tossed casually over sun-faded crates of boat parts, whatever I could imagine even beginning to hide a screen and arcade controls in. 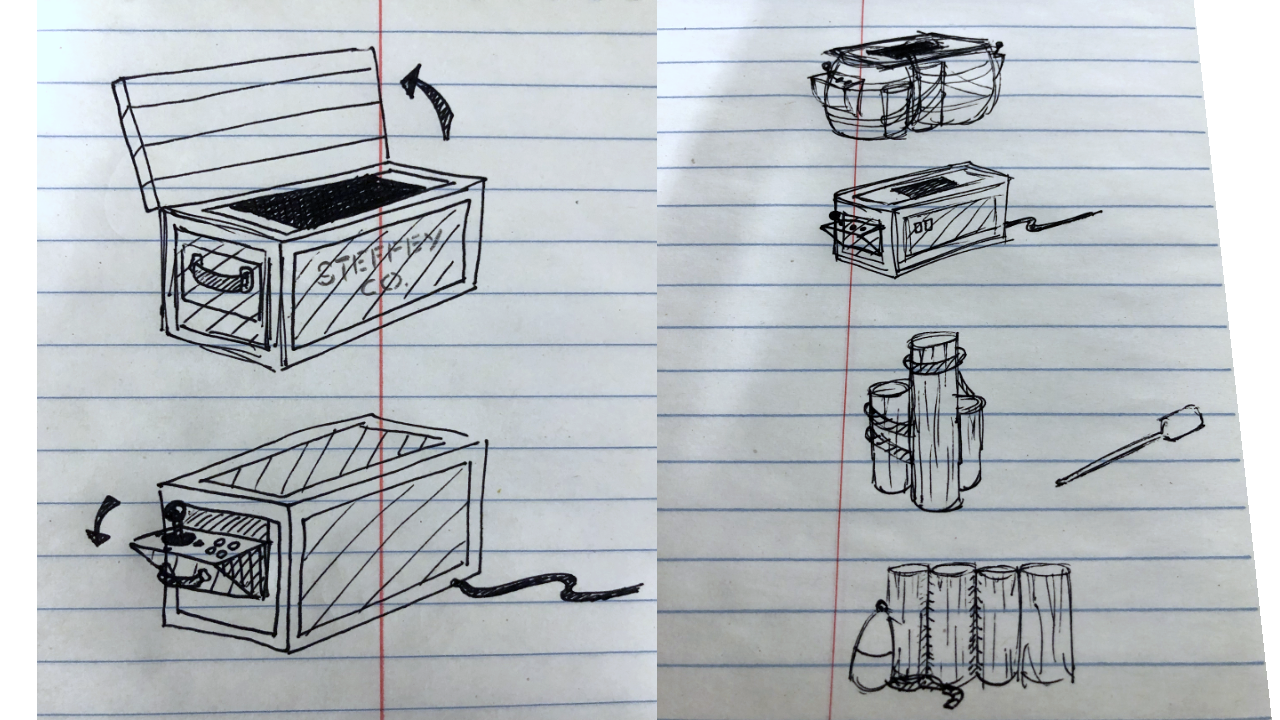 Unfortunately, the heavily-themed plan was plagued by some large obstacles:

After exhausting every drop of concept art ink I found within myself, I was forced to admit that I couldn’t crack that third bullet point. Designing something so ostenatious would be missing the target of my original intent (a gift for two normal, non-Shawn people), and so I backtracked to the furniture plan.

The paradox I found with this initially reluctant decision was how immediately freeing it was. I no longer had an ocean of options in front of me (pun intended), and now had to simply design a table. (Hopefully utilizing at least a touch of the same maritime aesthetics)

Immediately I seized upon the lacquered warm wood and brass elements that filled popular culture’s rendetions of a captain’s quarters.[6]Less “popular culture” and more “A seafood buffet at Myrtle Beach”, but the spirit still stands Disney’s 1954 film “20,000 Leagues Under the Sea” ended up being the missing piece. Red velvet and pipe organ aside, the furniture in Captain Nemo’s office and adjoining rooms had exactly the blend of wood and brass accents to heighten the nautical air, or blend into any family den should the need arise. 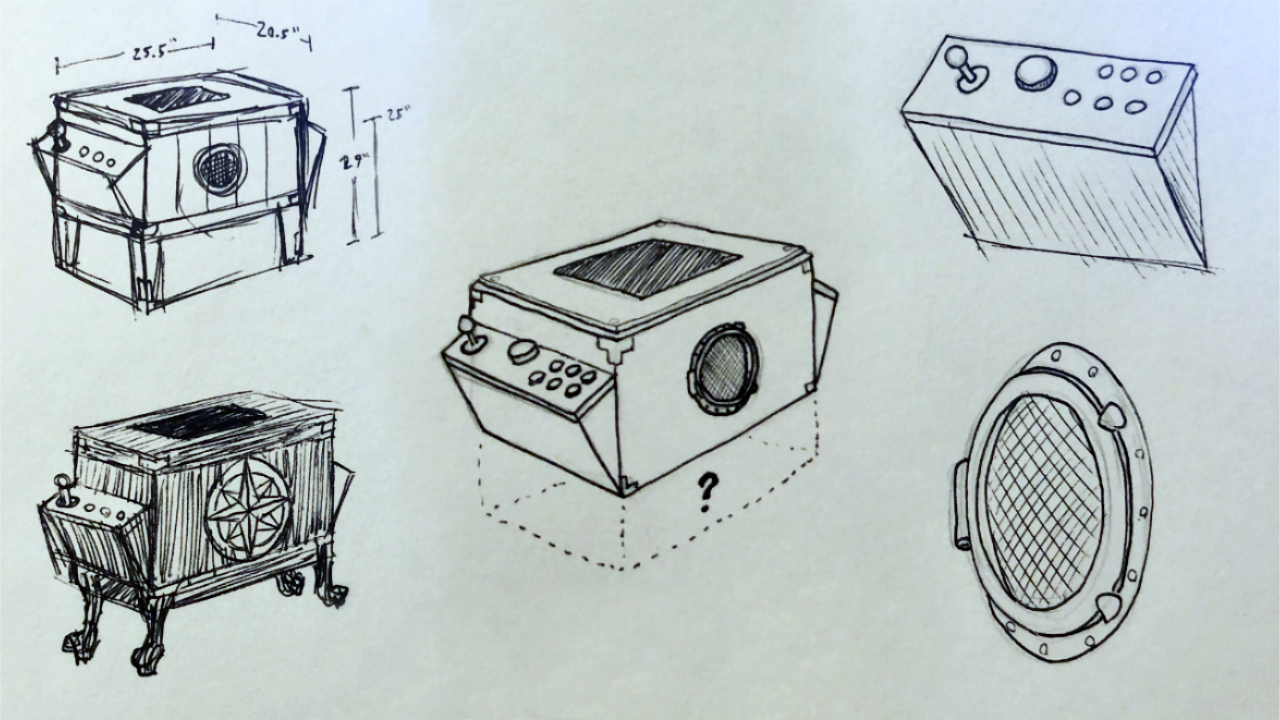 Materials and overall aesthetic feeling decided, I set to work on the form-factor of my table.

It is my intent to talk about the construction aspects in the next post, but it would be impossible to separate the two at this stage of design. The month of building the cabinet was as much a month of designing on the fly as parts arrived. With Covid-driven parts delays, unforseen additions, and Chinese suppliers lacking information on product dimensions, it was next to impossible for me to accurately gauge the full design up front. I instead had to design piecemeal, with as much tolerance for unknown variables as I could reasonably leave.

The “working target” I ended up following for this first month was the table-top only. I opted to fit the entire system near the screen and controls, leaving the base to be whatever height and design seemed to work best as expectations shifted during the project. This top-down approach allowed me to begin with the elements I knew early on, and work down from there as new parts arrived. The decorative brass strip set around the equator of the final table functions not only as decorative trim, but as a seam between two layers of design, since the only dimensions I was sure of when beginning were the top half.

I kept a running design of the entire wood project in Sketchup, based initially around the monitor and glass tabletop I already had, and updated it as new pieces arrived and were sized.[7]To save money, I found a pre-existing glass tabletop from a local yardsale. My recommendation to anyone else is to just pay for custom glass - the price is high either way, mine was just paid in constant stress and worry over the one piece of glass breaking after designing an entire table to its specific dimensions When I wasn’t sure of the next piece’s dimensions, I roughed out a large box with (what I assumed to be plenty of) extra padding around the edges and worked around it.

This was stressful.
I do not recommend it.
At many points it felt like the final few rows of a flailing Tetris game, desperately trying to fit a piece in the remaining space.

I had to constantly plan my base with flexibility in mind, because the next piece to arrive could drastically throw off things. I constantly had to design with the assumption that the trackball about to arrive on a boat from overseas was 2” wider than expected, had no easy mounting points, and was probably an ‘s’ shape mirrored from any potential slot I had ready. It was high-stress, forced my hand in a couple of key decisions, and ultimately I’ll be prioritizing getting a mostly complete parts supply before starting future projects.

Out to Sea, Lads!

The rest of the specifics around design will evolve during the next post (Part 2: Construction), but I ended this project very excited to have decently maintained my original design goals.

But more on all that next week…

Enjoyed this? Great! This 3 part post has 2 more parts for you to read!

>> Part 2 - Pac Man’s Chest
>> Part 3 - Coming Soon[9]Part 3 may run a bit later than the expected timeline, please continue sitting on the edge of your seat until then.