This is going to be a bit of a deviation from the normal posts on here- if only because I am probably a bit too obsessed with concept art, utopian design schemes, and EPCOT (Experimental Prototype Community of Tomorrow) Center.

If you haven’t seen it yet, the plans for Google’s new Mountain View headquarters are beautiful, inspirational, and ultimately a PR/Buzzword/vapid-statement fest.

But the empty phrasing and nonsensical statements aren’t the fault of the designers. This is a PR campaign, and getting emotion out of a nation of largely disinterested people is exactly the type of thing these releases are good at. The video works for the intended purpose.

However, the underlying concepts of what Google is attempting remain relevant. The campus proposal, while certainly nothing revolutionary, is to be done on a visible scale not yet accomplished by demo architects. Unique and sustainable architecture is all over the world in small doses. Experimental development is done daily, as a quick search on Pinterest for “Architecture” clearly shows. But for such a massively influential company to attempt something this forward-thinking, this strikes me as an important step forward.

As much as I enjoy architecture, I’m far from an expert. The field is far too wide for my passing interests to accurately represent in this post. However, I feel more than qualified for an incredibly brief look at the commonality between these plans and those of 1970’s era EPCOT (Experimental Prototype Community of Tomorrow) concept art (and why the video excites me so much as a result).

I recommend reading the rest of the post while this music plays: [1](“Cities of Tomorrow”, from Sim City 2013)

These pieces (and hundreds of others) were for the intended EPCOT (Experimental Prototype Community of Tomorrow) city, not the eventual theme park. Done while Walt still lived, they are absolutely brimming with optimism for the future. After his death, the project morphed into the park that eventually opened in ‘84. The famous Buckminster Fuller’s creations are heavily represented within the park, most notably in the centrepiece itself: the massive geodesic dome of Spaceship Earth.

The Google plans rely heavily on the integration of natural features with the giant geometrically tiled greenhouses that contain the actual facilities. Not only do these initiatives mesh well into Fuller’s own ambitions of self-sustaining biospheres, but are also reminiscent of Tony Baxter’s initial concepts for the Land Pavilion - another EPCOT (Experimental Prototype Community of Tomorrow) landmark. 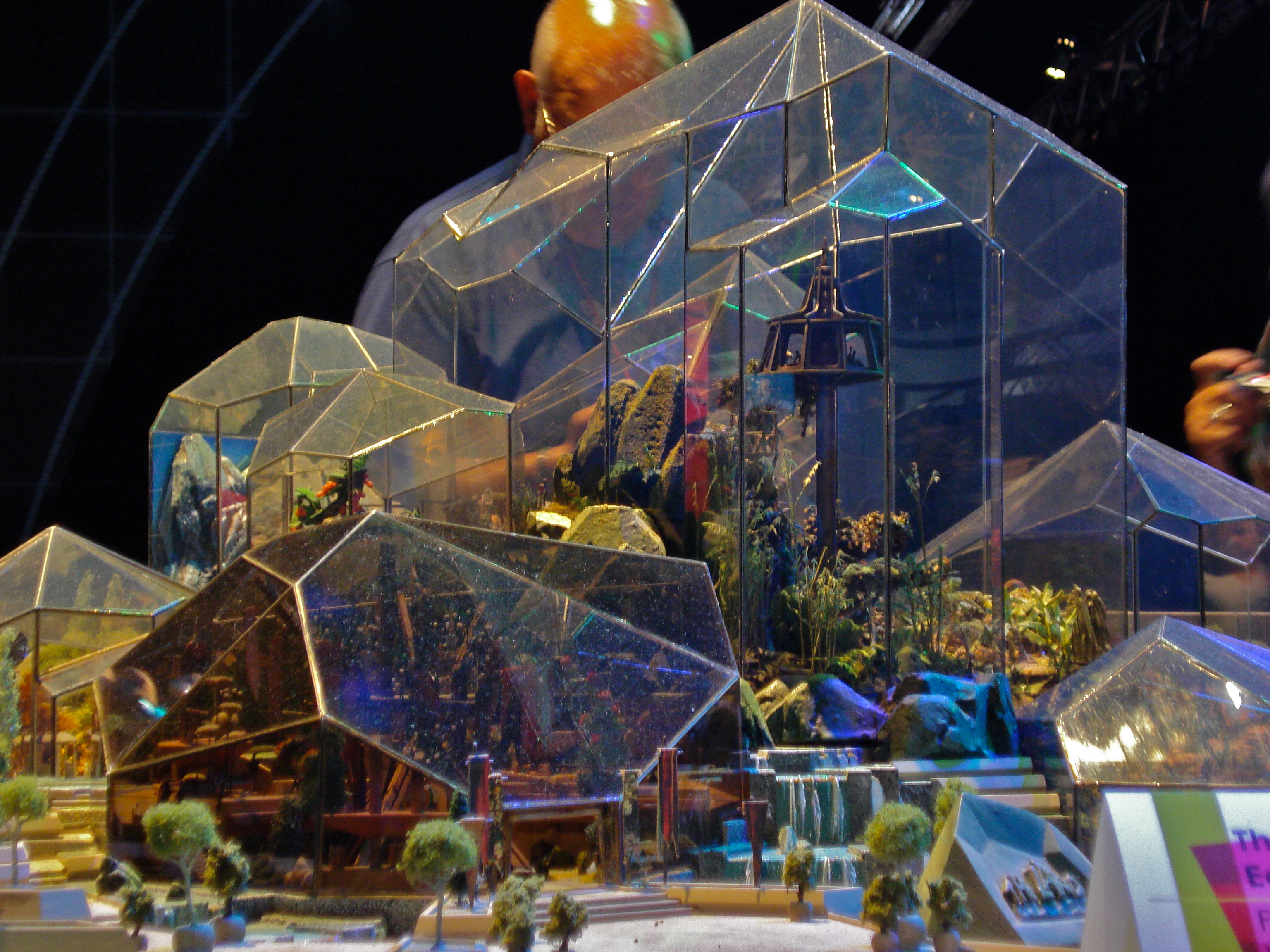 The Land pavilion today retains much of the original glass structure, largely for greenhouse purposes. Unfortunately, most of it is hidden from exterior view, but it can be seen from the inside during the pavilion’s attractions. Many of the massive greenhouses that the rides journey through are geodesic half-domes, in true Buckminster style.

Other similarities between the two projects can be drawn in many categories: or the bright, overexposed sunrise of looking to the future…

Clearly the similarities are coincidental, and result only from a general sense of pleasing aesthetics and nature. The hired architects for Google in all likelihood did not draw upon the WDI team’s concepts for a bygone development.

But- the few similarities are enough to excite me. And not just in the choice of visualization techniques, but in the concepts at their base. Both are clearly tailored to push the envelope on imagining future development. Google and Disney both possess the influence necessary to drive development on a national and global level. EPCOT (Experimental Prototype Community of Tomorrow) was designed to promote the future of city planning, while Mountain View seems to be spearheading an effort at sustainable architecture.

I cannot wait to see the results. If deep within you, this post awakened an insane craving for analyses of the minutiae considered in the design and aesthetics of Disney theme parks, then you should definitely check out Passport To Dreams Old and New.

(Really though. Her blog is the most advanced foray into the academics of design that I read- and it’s solely about the Disney properties.)

Also, in case I haven’t been clear - I miss when concept artists actually sketched people, instead of poorly plastering them in from photographs.